Spanstinden is probably the most popular destination for ski touring in the region of Narvik. Easy access, a short approach and mostly gentle and relatively safe terrain, combined with a stunning view from the 1400+ meters above sea level summit and a fairly high starting point at about 400 meters, which means both an early starting and long lasting season, is the reason for this.

The way up starts from the parking spot along the E6 and goes over the small lake called Bukkemyrvatnet. The climb up starts when you encounter the short and open forrest right after the lake. The lower part of the mountain is wide and there are many alternative routes that you can choose going up, but the most common is to more or less follow the same way as the summer path. The path goes through mostly quite gentle terrain, but there are some shorter sections with very steep slopes and outcrops that, depending on time of season and the amount of snow, migth be difficult to pass. A good tip might be to go quite far eastwards from about 600 meters above sea level.  The general route up goes towards the col at about 1160 meters between Sølvfjellet (1290 m.a.s) and Spanstinden (1457 m.a.s).  If one is short of time or just want to do a shorter tour, one can head for the summit of Sølvfjellet. To get there, one just goes west from the col and follows the slope toward the summit. At the top of the slope there is a short section of terrain above 30 degrees that might be windloaded with snow. The summit plateau is quite large and flat but there are steep cliffs both to the north and south of the summit, with cornices above and care should be taken when approaching the edge.

If one wants to go to the summit of Spanstinden, one just crosses eastwards from the col and follow the wide summit slope the last 300 meters to the summit. There is a section with terrain above 30 degrees on the west side of this slope, but if one avoids this you will be safe of avalanches. The last leg to the summit is almost flat, but the summit proper is very narrow and there are steep cliffs to the east, west and north of the summit and care should be taken when approaching this, especially in poor visibility.

The way down normally goes along the same route as when skinning up, but there are many possible alternative routes you can choose when skiing down.  Som of these goes through slopes that might be quite steep and, even though they are mostly quite short as well, migt be prone to avalanche. When skiing down the lower part of the mountain you should be carefull of small, but very steep slopes and outcrops that might be difficult to spot when approaching from above, especially in poor visibility. . When you have returned to the car, a nice alternative for rounding of the day is to og for an afterski at the newly reopened hotel of Gratangen Fjellhotell, which is situated just 3 kilometers dowen the road from the parking below Spanstinden.

Parking: Along the E6 at Bukkemyra

Driving distance and time from the city of Narvik:  Approximately 50 min and 50km. 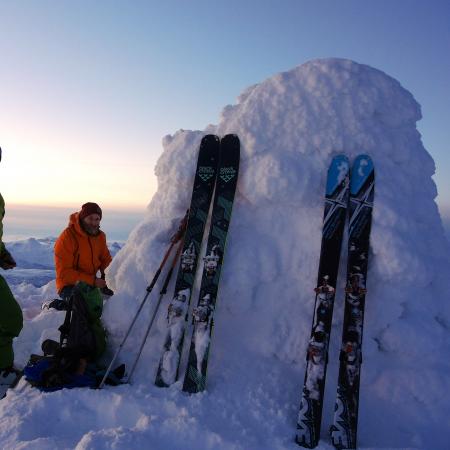 One of Norways most beautiful and calmest fjords is situated in Lavangen. 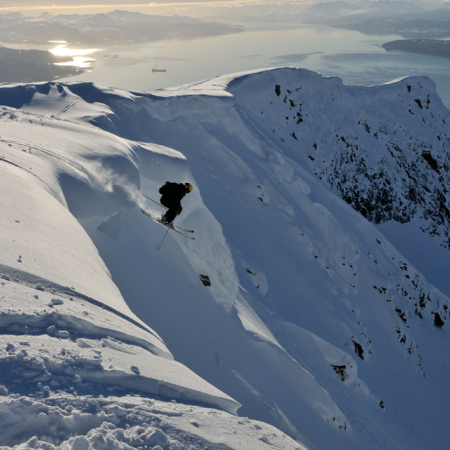 If you plan to travel here to explore our mountains, it is extremely